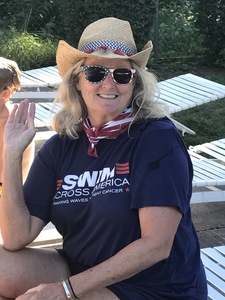 It’s exciting to have Colleen Winans return as our head coach again this year. I am sure all of you agree our team is in fabulous hands with Colleen’s coaching expertise.

Head Coach Colleen Winans has been with Ulmstead Swim Team since 2008. She has a Level 2 certification from the American Swim Coaches Association (ASCA). She has attended the World Swim Coaches Association clinic in 2013. She coached for the Novice A group for the Naval Academy Aquatic Club Team (NAAC) for five years 2006-2011. She currently teaches all ages and abilities of swimmers (children and adults) for the YMCA of Greater Annapolis. She is Broadneck High School’s Head Coach (November-February) and has been coaching the HS team since its inception in 2006. Her boys HS team has won the county, region, and state championships 2008-09 and is the current reigning county and region champion (2014) ; the girls team has been region champions in 2008 and 2012 and is the 2014 regular season champion (tied with Severna Park). Coach Winans has been a certified swimming (and water aerobics instructor) at Anne Arundel Community College, the Severna Park Swimming Association (SPY), and instructor at private pools throughout Anne Arundel County. She has taught all ages and levels of swimming from babies with parent programs to senior citizens and triathletes. She has been a competitive Master’s Swimmer with SPY since 1994 and has served as a substitute coach for that program and NAAC. She swam on a summer team, the Sleepy Hollow Legends in Orinda, CA and for Park Terrace in Sacramento, CA from ages 5-18. She coached a summer league team for two years in Lafayette, CA and was the Swimming Director for the University of California, Berkeley, Alumni Camp, the Lair of the Bear’s Camp Gold in Pinecrest, CA. She held certification as a Water Safety Instructor (WSI) and is currently certified in Lifesaving, CPR, and First-Aid. She also held her Water Aerobics instructor’s certification. She holds scuba certification through NAUI as well. Colleen formerly was certified as a YMCA Level 2 Stroke and Turn Judge. She has a BA in Mass Communications from the University of California, Berkeley. Her past employment was in the radio industry as a Promotions Director and Producer and various retail sales positions for UC Berkeley, Neiman Marcus, and Macy’s.

She is well-versed in all four competitive strokes, however, the breaststroke is her favorite!

Colleen’s experience will undoubtedly assist our team in maintaining a competitive edge this summer, and her philosophy on swim team ensures fun for all ages — the most important thing!

Thank you to our Sponsors!!

Click here to go to the registration page for the Ulmstead Triathlon, happening on September 5!

Your Shopping Cart is empty